“On the twelfth day of Christmas, my true love gave to me….”. We’re following the Twelve Days of Christmas theme to look back on some of the activities, events and news items that provided an insight into life at Exmoor National Park through 2016.

December brought more project funding success, plus we were getting into the festive mood in Dunster and Lynmouth.

A project to record, refurbish, celebrate and explore the history of traditional signposts in the National Park received grants from the Heritage Lottery Fund (HLF), Somerset County Council and the National Park Authority. The project had been prompted by local communities concerned about the state of some signposts in their areas and their desire to preserve the distinctive character of the historic signs. Survey work to prepare for a bid enabled volunteers to assess the condition and repair of nearly 100 signposts, providing data highlighting the general condition of signposts and the issues involved. Initial results indicated the majority of signposts needed attention in terms of cleaning and repainting but were otherwise sound.

We recognise this successful outcome could not have happened without the help of the volunteers who recorded their signposts and the many letters of support from parishes, organisations and individuals, so thank you to everyone who helped. We look forward to seeing the results of the project in two years’ time. 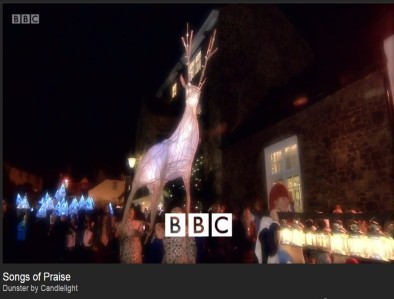 The annual Dunster by candlelight event was started in the 1980s as a way to keep trade going to keep the village alive during the winter months. It also supported charities, for example raising over £100,000 for St. Margaret’s Somerset Hospice over the years. As the Candlelight has got bigger, High Street and Church Street are closed to traffic during the evenings, supported by park and ride from Minehead. This year the BBC sent a team from Songs of Praise to film various happenings at Candlelight which were shown on their programme later in the month on Sunday 18th. Everyone enjoyed the procession with the illuminated Deer ; pupils from Dunster Village School and Foxes Academy carried the lanterns they had made, along with wearing tabards made by the Dunster WI, and artist Emma Bradshaw designed and stenciled the candle motif.

We got into the Yuletide spirit early at the Lynmouth Christmas Fayre, hosted by the National Park Centre team at the Lynmouth Pavilion. Having run a small event in 2015, lots of local traders wanted to be involved, so this year had 15 stalls inside the Centre (including arts, crafts, books, pottery, woodcraft items, jewellery and other seasonal items), plus a further 15 market stalls outside along the Esplanade (selling food, Christmas trees & wreaths, and lots more Christmassy items).

Suzette Hibbert, Mayor of Lynton & Lynmouth opened the fayre – and we even provided ‘real’ snow to make it truly festive! Inside the Pavilion, Santa was on hand to oversee the activities keeping us all busy, including face-painting, an elf workshop where children made Christmas tree decorations, and a “make a Christmas card” competition. Proceeds from a raffle and the £5 hire fee for the stalls were donated to CareMoor for Exmoor, to support the Dormice boxes appeal.

We hope you’ve enjoyed this look back over 2016 to see the wide variety of activities and projects we get involved in here at Exmoor National Park Authority. And the pace isn’t slowing down for 2017!