Exmoor National Park has recently hosted (for a day) two Physics teachers who are spending their September running off-road marathons in each of the 15 National Parks in the UK. But it’s not just about the running – Claire Aspinall and Pam Ellison are also aiming to show how the Science curriculum can be brought to life outdoors. They also want people to pledge to visit a National Park to discover how outdoor learning can educate, inspire and inform. You can make your pledge here.

Claire and Pam completed their Exmoor-marathon on Friday 9th September after an early start and nearly 28 miles (which included over 2,400 metres of climbing). With advice from ENPA’s Learning & Outreach Officer Dave Gurnett, they had changed their circular route to follow the coastal path westwards from Porlock to Combe Martin – as they described in their blog:

“It was also a great opportunity to marvel at the coastline that makes this National Park so unique. Exmoor has the highest coastline in England and Wales with the coastline hills raising to 433m at Culbone Hill. This is due to the topography of the site which is particularly dramatic and has had a big impact on the people who have settled here. Due to the collision of tectonic plates, the bedding planes have been lifted and tilted, resulting in steep cliffs dropping down in to the Bristol Channel, but far gentler slopes stretching out into the moorlands to the South.”

During their visit to Exmoor, they also took readings of the background radioactivity to provide a comparison to the results they had got on Dartmoor earlier in the week. Whilst the moorland looks fairly similar in both parks, the geology is very different. Dartmoor sits on igneous rock (granite) whereas Exmoor is sedimentary rock (deposited as layers of mud or sand) which is 100 million years older. As geophysicists Claire and Pam were very happy to have the opportunity to compare the nuclear radiation readings across the two Parks:

“Physics investigations have a habit of not always working in the classroom so we were really keen to get some success in the field. Excitingly, it worked! Even though readings could only be relative due to the limited sensitivity of the meters, there was a clear difference between our findings from each park. The presence of the granite in Dartmoor produced significantly more elevated average reading of around 0.17 micro-Sieverts, compared to an average of 10 micro-Sieverts for Exmoor. Fantastic, a physics experiment that not only worked but was great fun in collecting!” 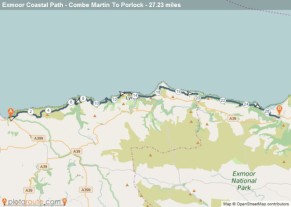 They also had a chance to discover the work that Exmoor National Park does with the local schools when they popped in to our National Park Centre at Lynmouth Pavilion – getting pupils out of the classroom and the interactive displays in the centre. And it seems Exmoor has left its mark on two more visitors:

“Some days you know you will never forget. With stunning views, great company and perfect weather we all knew this was one of them.”

Thank you Claire and Pam – we were delighted to host you for the day – and wish you all the best for your remaining visits!

Thanks also for permission to use their photos and blog extracts for our article here. To read their full version of their day on Exmoor, click here. You can also follow their remaining visits to the other National Parks on twitter @ParkDiscoverers – they are travelling clockwise around the country, starting in the Norfolk Broads and finishing in the Cairngorms on 28th September (at the time of writing, they had just finished their Peak District marathon).