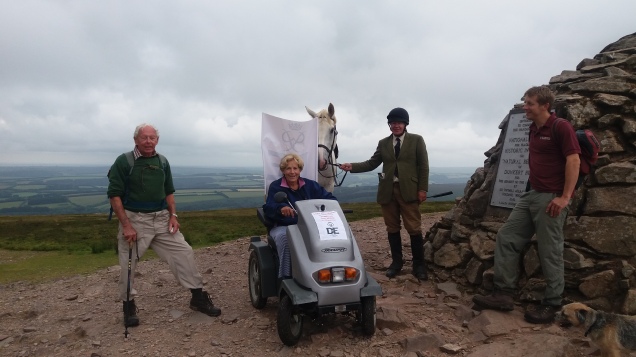 Back in July, to mark the 60th anniversary of The Duke of Edinburgh Award Scheme, the Lord Lieutenant of Somerset, Annie Maw, completed a 60 mile trek across the county in her Tramper (an electric all-terrain vehicle). To celebrate her achievement, she has kindly allowed us to share her memories of the morning of Day 3 when she conquered the heights of Dunkery, ably supported by Dan Barnett and Tim Parish from Exmoor National Park.

In 2002 Annie Maw had a riding accident resulting in paraplegia. Despite life in a wheelchair, she became the High Sheriff of Somerset in 2008, before being selected in 2015 as the representative of the Crown for the county. She is a trustee of several charities supporting disabilities, and specifically supporting those with spinal injuries in the West Country. The Duke of Edinburgh Award’s Diamond Challenge was to set out to achieve something personal and Annie’s sense of adventure resulted in the 60 mile tramper trek. Below are her highlights from the morning of Day 3 – her Facebook page DoE Tramper Trek details all her adventure in her tramper trek.

Annie and her husband Dickie drove to Exford to find village life was well under way even though it was still barely 9.30. On arrival at the departure point, just above the village, we were joined by several supporters including Bill Canning, Tom Lang, Robin Nicholl and Dr Tom Bigge from the Calvert Trust and Dan Barnett, Access Manager and  Ranger Tim Parish both from Exmoor National Park. And not forgetting Dan’s little terrier, Jasper and Robin’s beautiful and ENORMOUS grey horse Duke. “He was set to accompany us up to Dunkery Beacon and on down towards Wootton Courtney.  This, for me, was just superb as to have a horse there made me feel strangely much more secure…..”
“The first little stretch of  track we had to negotiate was really rather a challenge with deep concrete hard ruts from vehicles and I wondered what on earth I had taken on.  However, Dan knew all about Trampers and what I could and couldn’t safely do in mine.  He took me over this first 100 yards and after that the track flattened out and I was able to travel along very easily.  I talked and talked with Bill who walked beside me and it was just perfect.

I began to be free to press on quite fast and had the brief feeling of freedom which I knew about of old on the back of a horse.  We reached the top eventually, having had the pleasant experience of seeing the cairn of the beacon in the distance for some time, and the path winding up to it as a challenge.  The air was warm and it was just perfect.

The view from the top was so thrilling that I could hardly take it in.  I have only just grasped the reality that I made it up there since I started to write today…. was  it just a dream?  There was a very nice couple from Devon who profess to love Exmoor more than their native Dartmoor and had walked, more or less abreast of us, to the top.  There is a unique camaraderie about being somewhere, almost alone but with a small group of like minded people, in a place like Dunkery Beacon….  I need to be there again before I die.

“Dan brought me down safely and how he did it, I don’t really know. I had thought, on the way up, that the challenge would be in the climb and once we started to descend it would all be simple…. but that was the complete opposite of reality….. just the slope from the cairn itself was steep and daunting.  ‘Just head down there, Annie. You’ll be completely safe’ and so I did and I was!

I trusted him so completely that I managed to travel down a track which I would simply never have contemplated was even possible without his suggestion!

We passed great patches of cotton grass which are topped with straggling puffs of white strands blowing in the wind.  It looks as if ragged white cloth has been caught on the hard spikes of the grass and is eye catching from some distance like a white paper trail.  Our path was bordered by heather in full flower almost all the way down the hill.

Away in the distance was a small group of Exmoor ponies with at least one foal at foot.  They were grazing and took no notice of us.  We didn’t see any deer but I wonder, since, if they wander near to the beacon at this time of year.

Eventually, we reached woods which, as Dan explained, are slowly creeping up the slope which we had come down.  It was a mixture of trees – birch, some ash and lines of beech which were growing out of the old field margin banks just visible on the forest floor.  Robin remounted Duke and we carried on down the hill on a much smoother easy path.  There was a silence through which you could almost hear the sounds of other generations, of other times when everyone worked on the land, when, during the summer months, people toiled there carrying out all the work needed before the winter weather made this place almost unreachable on horse back or even on foot.

We came to another meeting point and there were Tom, Tim and Dickie.  We had one more section of woodland leading to Wootton Courtney and that was easy.

I’d no idea that this beautiful place was the stimulus for the hymn ‘All things Bright and Beautiful’ by Cecil Frances Alexander while staying in Dunster…. I have now discovered that the first hymn which I knew by heart was written to describe the foot hills of Exmoor and how accurate it is!

Finally, Dan and Tim left us – as ever it was nearly impossible to think how to say an adequate thank you to Dan for his guidance, advice and Tramper driving instruction!  Off they went with Dan’s little dog at his side.”

And at the end of Day 3, Annie singled out the companions who had supported her most!

“Today, the Valiance prize must go to Duke, the big grey horse, who, used to hunting on the top of the hill, eyed the shiny wet roads and me in my weird contraption with some doubt.  However, towards the end of his duty as my guide and protector, he actually accepted my offer to give him a lead down a narrow lane beset with grill covered drains.  Odd how compliments come in strange guises sometimes.  I thought this the most supreme of all compliments!

The winner is a little more difficult to identify but I think it must be Dan’s little dog, Jasper, although he finished his part of the journey before the end of ours.  His size, and the length of his legs, meant that he had walked for about the same distance that a human would have covered if he’d walked across the whole county.  AND, for much of the journey he carried a stone about the size of a cricket ball in his mouth….”